Lose Weight in Bellevue with Chocolate

Lose Weight in Bellevue with Chocolate
Posted by Mike, Pam & Tara at 10:02 PM No comments:

Recession Proof Healthy Chocolate For Seattle
Posted by Mike, Pam & Tara at 11:10 AM No comments:

What is Flexible Targeting?

What is Flexible Targeting?
Posted by Mike, Pam & Tara at 1:46 PM No comments:

Buy Antioxidant Chocolate in Bellevue
Posted by Mike, Pam & Tara at 11:14 AM No comments:

WHAT’S COOKING IN THE KITCHEN AT SEATTLE HOME SHOW 2

At Seattle Home show 2, Northwesterners can see all that’s hot for the Northwest kitchen. In today’s economy, Northwesterners are increasingly focusing on value and simplicity, generally opting for mid-range products and designs. 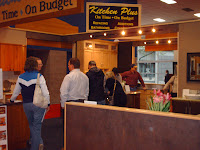 At the Kitchen Plus exhibit, show visitors are viewing some of the various options for kitchen design. These include remodeling, refacing, cabinet replacement and more. Several kitchen vignettes are displayed, including “before” and after display. 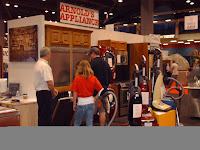 In the Arnold’s Appliance booth, show goers can see an extensive display of what’s trending in appliances for the kitchen and laundry. Stainless steel continues to be the number one choice for the kitchen, with consumers gravitating towards the mid-range instead of top of the line products as they had just a few years ago. White is big in the laundry, but the use of color on the washer and dryer is a growing trend.

Today marks the final day for Seattle Home Show 2 2010, the fall version of the nation’s oldest and largest home show. Crowds have been brisk as show visitors vie to see all the latest products and services for the home, as well as to take advantage of Show-only discounts, all in a single location.

Among the activities happening on closing day at Seattle Home Show 2 are:

Final day show hours are 10 AM to 6 PM. For more information, visit www.seattlehomeshow.com

At Seattle Home Show 2, show visitors are having the chance to learn to cook like the pros from chefs at some of the top restaurants in town at the Seattle Home Show 2’s Cooking Demonstration Series. Chefs such as Chef Gabriel Cabrera of Salty’s in Redondo Beach have been entertaining show visitors as well as sharing some of their own cooking secrets as they demonstrate live how to prepare some of their favorite recipes. 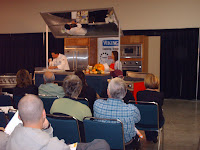 Chef Cabrera demonstrated how to cook a crustaceous crab cake with piquant pepper aioli. All audience members received a copy of the recipe along with a discount coupon for a lunch or dinner at Salty’s. Chef Cabrera, who said he likes a lively audience, encouraged the audience to clap and ask questions, with a free brunch at Salty’s given the most enthusiastic audience member.

Other chefs scheduled to appear at Seattle Home Show 2 are Chef Franz Junga of Il Fornaio Saturday at 4 PM, Chef James Gibson, Salty’s on Allki on Sunday at noon and Chef Michael Hillyer of Daniel’s Broiler Sunday at 2 PM.

Seattle Home Show 2 runs through now through Sunday, October 10. For more details, visit the website at www.seattlehomeshow.com.
Posted by Mike, Pam & Tara at 3:33 PM No comments:

Listed here are just some of the unique items that were points achieved to qualify for the 4 Star. “What makes it so interesting is that we achieved 635 points when only 500 points were needed for a 5 Star certification,” says Stockmann. Among the points rated are:

Excavation - there were no soils removed from the site.
Masonry - all stone used was excavated from the site.
Building Products - FSC Certified (Forest Stewardship Council) or similar process followed.

Electrical - Solar voltaic panels wired to operate the transfer of collected power back to the "grid" for credit in the future operation of the home, along with LED, CFL, and low voltage lighting plan which allows them to achieve 75% less cost
Landscaping -- All rockery was provided by the on site excavation for the foundation of the home. Plantings were all "native low water usage plants" plus salvaged plants that were replanted due to excavation. Grasses were a special grass seed that needs virtually no water and only grows to a height of 6 inches for the growing period of the year 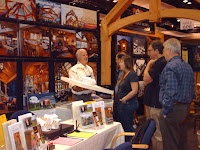 SBC is featuring an extensive photographic display of the home, with a personal appearance by the homeowners on Saturday. Also included in the SBC booth is a display by some of the suppliers for the home of various reclaimed and recycled building materials available to consumers.
Posted by Mike, Pam & Tara at 11:04 AM No comments:

Seattle Home Show 2 has been in the news throughout the week with previews on some of the region’s top TV shows. 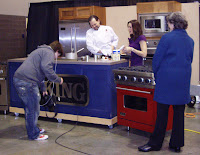 On Wednesday, Q13’s Kaci Aitchinson of “Mornings with Kaci” gave viewers a sneak peak of some of the top features at Seattle Home Show 2, including building a backyard cottage (complete with Kaci in a hard hat on a ladder helping workers), making a hot fudge sundae with Chef Nick Musser of the icon Grill and learning how to save energy with the latest products for home automation 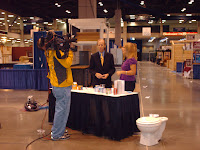 Thursday, Christie Johnson of KING 5 Morning News spent time with the guru of household hints, Joey Green, and The Wall Wizard Brian Santos to get an advance look at their novel and innovative tips to help save money at home. Green shared some of his tips for unusual use for brand name products, including how to clean a toilet with Coke, shave using peanut butter and polish furniture with Spam. The Wall Wizard offered a preview of his tips for “Painting from the Pantry,” such as using lip balm instead of masking tape to create paint lines and cleaning paint brushes in 10 seconds with fabric softener.

New Day Northwest featured Joey Green with more of his household hints, including cleaning stains from clothes with Cheez Whiz.

Seattle Home Show 2, the fall version of the nation’s oldest and largest home show, opens today at Qwest Field Event Center. Everything from cleaning with Spam to reducing energy bills through home automation is being featured at this year’s Show. This year’s highlights include:

- Cost-effective tips and ideas for green design and green living, including a fully staged exhibit featuring the latest in home automation products that save energy 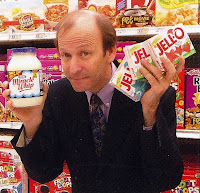 - Joey Green, the guru of household hints, who demonstrates novel and inexpensive tips for cleaning the home, from cleaning jewelry with Efferdent to polishing furniture using Spam.

- Preparing for the housing rebound (yes, experts predict that housing will rebound by 2014, and Washington State is projected to be the number one market in the nation) 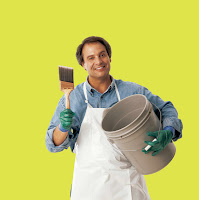 - Brian Santos (aka “The Wall Wizard”) who offers tips on “Painting From The Pantry.” Santos helps consumers cut painting costs by using products you already have at home. Tips include using everything from plastic wrap and toothpicks to vanilla to streamline painting and save money.

For more information, or to purchase E-Tickets, please visit the Seattle Home Show website at http://www.seattlehomeshow.com/